Where Do I Enter The Coupon on JCPenney?

Deals for JCPenney are easy to find, and in the tutorial below we will show you that they are also easy to redeem. So if you are asking “where do I enter the coupon on JCPenney?”, simply follow the simple steps below. However, if you are wanting to redeem a JCPenney gift card, click here.

Where Do I Enter The Coupon on JCPenney?

Next, narrow your search down by navigating to the style and design you like.

Now choose from the options you are given, and click ADD TO CART. 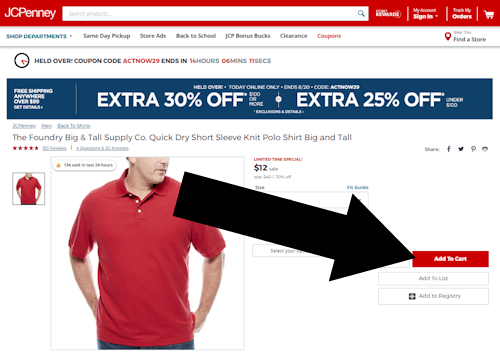 When an item is added to your shopping cart (or bag) a slide over will confirm your choice and give you the option to continue shopping or CHECKOUT. 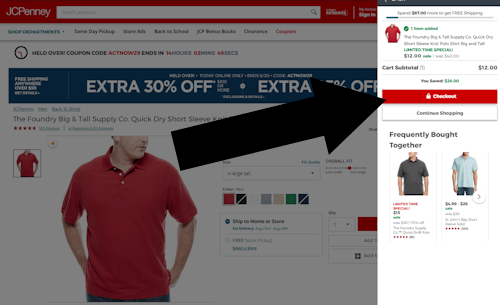 NEXT STEP$
JCPenney is a fascinating case study on how much consumers love coupons. Back in 2012, the decision was taken – led by Apple’s former retail magic man, to cut back the number of coupons the store issued. It was an intriguing theory, lower the prices on all products and cut out the special deals. The theory was that customers do appreciate the all-around lower prices and sales would surge. And all without the need for constant printing, posting, and processing of coupons. As it turns out, the JCPenney brain-trust did not take into account just one thing. Coupons drive traffic to the website, and because of that, into the brick and mortar stores also. Without the coupons, traffic plummeted. They initially blamed the customers for not understanding the new pricing model, however, it was not long before the coupons had returned. And so did the traffic and sales.